Density and Thermoelastic Properties of Liquid Fe-FeO at High Pressure

We have measured the density of liquid Fe98.3O1.7 in the P-T range of 1.4 - 6.1 GPa and 1950 - 2250 K using X-ray absorption method at BL22XU. Microprobe analysis of the recovered samples showed the reaction between the sample and BN spacer. After removing the BN contribution to the sample density, the estimated densities of liquid Fe-O increase from 6.71 to 7.08 g/cm3 with pressure at 2200 K.

High-pressure and high-temperature experiments were conducted using a 180 ton DIA-type cubic anvil press (SMAP-180). The truncated edge length of the tungsten carbide (WC) anvil was 4 mm. We used monochromatic X-ray beam tuned to 35 keV, which was optimized for the best X-ray absorption contrast between the sample and surrounding materials. The incident X-ray beam was collimated to a size of 50 × 50 μm by a pair of slits. The intensities of the incident X-ray (I0) and transmitted X-ray (I) were measured using two ion chambers located in front of and behind the press, respectively.

The starting material was Fe-0.5 wt% (1.7 at%) O. This composition corresponds to the eutectic composition in the Fe-FeO system at 3 GPa [7]. The cross-section of the cell assembly in this study is shown in Fig. 1. The initially powdered sample was enclosed in a cylindrical single-crystal alumina (Al2O3) capsule with sintered alumina lids. The alumina capsule is deformable in the present experimental conditions. A cylindrical graphite heater was used. A pressure marker was a powder mixture of BN and MgO. The X-ray diffractions from the sample and the pressure marker were collected on an imaging plate detector. Experimental temperature and pressure were estimated using both W97%Re3%-W75%Re25% thermocouple and two equations of state of the pressure marker [8][9].

Fig. 1. A schematic picture of the cell assembly. 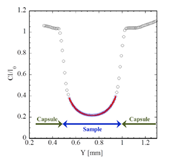 Fig. 2. X-ray absorption profile at 1.4 GPa and 2200 K. The open circles denote the observed I/I0 values. C represents a correction factor for difference in detectability of two ion chambers. The red curve is the regression curve fitting to blue circles using the equation (1).


The recovered samples were polished to observe its quench texture and to analyze chemical composition using an electron microprobe (JEOL, JXA-8230) with wavelength-dispersive spectroscopic (WDS) method at Okayama University. The microprobe analyses were operated at an accelerating voltage of 15 kV and beam currents of 20 nA. We used an electron beam with diameters of 1-2 μm.

The density of liquid Fe-O was measured up to 6.1 GPa and 2250 K. Melting of the sample was confirmed based on disappearance of the sample diffraction peaks and appearance of diffuse scattering. The melting was also identified from intensity change of the absorption profiles of the sample.

Fig. 3. The back-scattered electron image of the recovered sample. (a) Image of entire part of the sample. (b) Close-up view of the rectangular region outlined in (a). 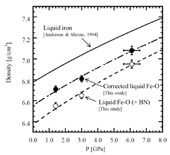 This study shows that the density reduction of liquid Fe caused by oxygen dissolution is estimated at least 3%. The chemical reaction between leaked sample and BN spacer is possibly avoided by using MgO spacer instead of BN and by carrying out the fast XRD measurement with the flat panel detector before leaking.

The authors acknowledge R. Kamuro and S. Kishimoto for technical assistance and T. Sakaiya for constructive discussions. This work was partly supported by Grants-in-Aid for scientific research from the Ministry of Education, Culture, Sports, Science and Technology of the Japanese Government to H.T. (no.23340159). This work was also supported by a Grant-in-Aid for JSPS Fellows to Y.T. (no. 26･1795).