Studies on isolated vessels reveal that angiotensin-II type 2 receptors (AT2R) oppose most of the known actions of angiotensin-II type 1 receptors (AT1R), which include vasoconstriction and vasospasms, particularly within the microvessels [1]. Some studies indicate that in pathological disease states, AT2R activation evokes vasoconstriction in certain vascular beds [2-3]. AT2R-mediated vasodilation is widely believed to be due to activation of bradykinin and nitric oxide (NO) signaling [4-5], however, there have been no in situ investigations of AT2R-mediated vasomotor regulation to date. In male prediabetic Goto-Kakizaki (GK) and type-1 diabetic rats we have shown with SR microangiography that endothelium derived hyperpolarization factors (EDHF) are diminished leading to coronary dysfunction [6-7]. In this proposal we investigated if the AT2R agonist, C21, evokes dilation in vivo in the coronary circulation of female Wistar and GK rats, and whether prediabetes has any effect on this vascular response.

To achieve this aim terminal experiments were performed at BL28B2 on rats anaesthetized with pentobarbital sodium (50 mg/kg intraperitoneal) and surgically prepared as previously described by us [6] with approval of the SPring-8 Animal Experiment Committee (proposal 2014B1154). Imaging of the coronary circulation in supine rats was performed with monochromatic SR at 33.2 keV (above the iodine K-edge energy) to maximise absorption contrast of the intra-arterially infused iodinated contrast agent (Iomeron 350 mg/ml iodine) using the SATICON detector system (9.5 µm pixel size, <2 ms shutter open time at 33 frames/s). Analysis of variance with post hoc Student unpaired t-tests was used to compare differences in vessel calibre and vessel number between groups. Two-tailed P<0.05 was considered statistically significant.

Representative images from cine angiogram sequences during baseline, continuous C21 (1 µg/kg/min) infusion before and 30 min after blockade of NO and prostanoid production (L-NAME, Sigma-Aldrich 50 mg/kg and sodium meclofenamate, Sigma-Aldrich 3 mg/kg intravenous) are presented in Fig. 1. These images reveal little difference in coronary perfusion at baseline as a similar number of radiopaque vessels were visualized and basal internal diameters (calibre) were similar across the first four branching orders in prediabetic rats relative to control Wistar rats, albeit the large artery diameter of first order branches was greater in the GK rats (Fig. 2). C21 evoked a modest increase in coronary vessel diameter in Wistar rats in the presence of endogenous NO production, particularly in the second and third order resistance arterial vessels (Fig. 1. Asterisks), which was slightly potentiated by blockade of NO and prostanoids. This finding suggests that rather than NO, the main mechanism mediating C21-induced vasodilation in non-diabetic female rats involves an EDHF. In stark contrast, C21 evoked pronounced constriction or no significant change from baseline in medium to small arterial vessels (Fig. 1 & 3). The most likely explanation for the constrictor response that was observed in GK rats is that this relatively high dose of agonist was no longer selective for AT2R and also bound AT1R, even though a constrictor response was not observed in the age-matched Wistar rats. A limitation in this study, was that lower doses of C21 were not investigated in the GK rats. Furthermore, C21 binding to AT1R in vivo was not confirmed by imaging during combined C21 and AT1R antagonism.

Fig. 1. Representative frames from sequential coronary cine-angiograms for a female Wistar and prediabetic Goto-Kakizaki (GK) rat recorded at 33.2 keV during bolus iodinated contrast agent infusion. Tungsten wire was used for calibration purposes during calibre measurements is indicated in each panel. Responses to C21 stimulation were tested before and after blockade of NO and prostanoid production. Black arrows indicate vessel segments that constricted relative to baseline in the GK rat heart. White asterisks indicate vessel segments that dilated in response to C21. 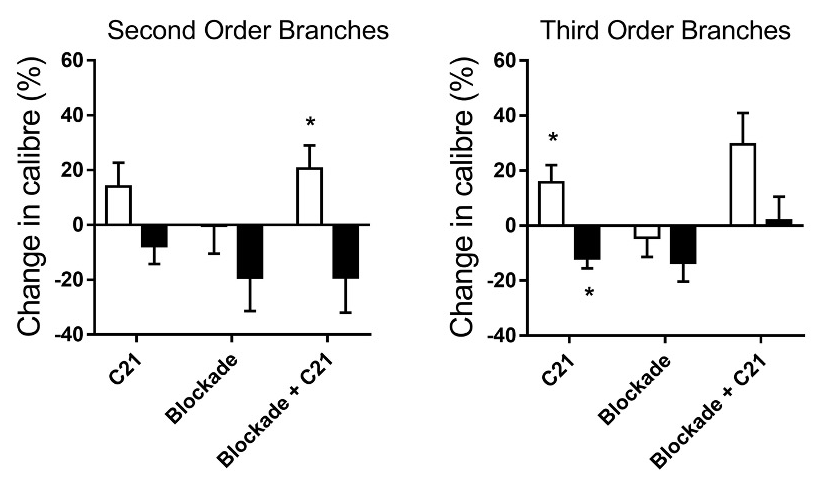 Fig. 3. Relative change in internal diameters of second (conduit and resistance vessels) and third order branch (resistance vessels) arterial vessels in response to infusion of C21 (1 µg/kg/min) before and after blockade of endogenous NO and prostanoid synthesis in female Wistar (open bars) and Goto-Kakizaki (black bars) rats. Mean ± SE. n= 6 per group. *P<0.05 vs baseline calibre.

It has not been established if AT2R stimulation evokes comparable vasodilation in the coronary vascular bed in male rats, or if this response varies under pathological conditions. Since the AT2R gene is located on the X chromosome, the AT2R to AT1R ratio is generally lower in males than females, which might make it challenging to detect the role of AT2R in vasomotor control in males except possibly when AT2R protein expression and vessel distribution is altered by cardiovascular disease. Moreover, there is a lack of suitably sensitive angiotensin-II receptor antibodies to investigate receptor localization and density that limits the utility of immunohistochemistry approaches to validate some of these findings.

We now need to examine if the vasoconstrictor response to C21 in female prediabetic rats is due to C21 also binding to AT1R at the dose utilized in our study, even though preliminary investigation found no difference in C21-mediated dilation at 300 ng/kg/min and 1 µg/kg/min in Wistar rats. Further, it will be important to establish if the vasoprotective actions of C21 in the normal heart are increased by concurrent AT1R antagonism.

This work was funded by an intramural fund from the NCVC (27-2-1), the Uehara Memorial Foundation and the International Synchrotron Access Programme (AS/IA143) managed by the Australian Synchrotron. R.E. Widdop received C21 as a gift from Vicore Pharma.