Recent advances in ab initio structural prediction techniques have shown the complex relationship between electronic and crystalline structures of high-density solids obtained at high pressure. Uncommon phases of materials and unusual stoichiometry have been predicted to exist in many binary systems [1]. The present work has been motivated by a recent theoretical prediction for the formation, under compression, of binary alloys obtained between lithium and nitrogen [2]. It was predicted that the N3- groups in LiN3, used as the starting material, should dimerize and form a planar hexagonal "N6" molecular unit, present in a hexagonal high-pressure phase of the Li-N system. Other cases of molecular clustering at high pressure have been unveiled. For instance, it was shown that solid oxygen in its epsilon phase, which exists from 10 to 96 GPa, packs to form "O8" molecular units [3,4]. The possibility to achieve a planar "N6" molecular unit at high density is enticing and prompted an experimental investigation.

The predicted "N62-" anion, will have 8 electrons distributed in the π-orbitals. This, however, violates the well-established 4n+2 Huckel principle [5] for planar aromatic molecules: the planar hexagonal structure is forbidden since the two electrons occupying the pair of degenerate anti-bonding pi-orbitals will be subjected to a Jahn-Teller (J-T) distortion. In fact, although the neutral "N6" moiety satisfies the 4n+2 rule, the hexagonal planar structure is expected to be unstable due to severe repulsion from the nitrogen lone pairs. Therefore, the predicted existence of a mechanically and dynamically stable planar hexagonal "N6" is by itself extraordinary and, if observed experimentally, would represent a major scientific breakthrough. Should "N6” units indeed exist in a high-density structure of the Li-N system, owing to strong J-T instability (vide infra), strong electron-phonon coupling would be expected as already been verified by our theoretical calculations. The pressure at which the transition from the ambient to the novel hexagonal phase is expected to occur at about 32 GPa, well possible in high-pressure experiments using diamond anvil cells. In the report, we present and discuss the results of a study carried out by powder X-ray diffraction and Raman spectroscopy of the evolution as a function of pressure and elevated temperature of the crystal structure(s) of the Li-N system.

Samples of Li-N2 were prepared by first loading high-purity lithium pieces under an inert Ar atmosphere into a laser-machined cavity (compression chamber) in the rhenium gasket used in a diamond anvil cell. The remaining volume of the compression chamber was then filled with high purity nitrogen (99.995%) in a gas-loading system. Contamination by oxygen or moisture was avoided during all samples loading steps. Pressures were estimated by ruby luminescence. Initial sample integrity and purity were checked at low pressure (about 1 GPa) and room temperature: X-ray diffraction and Raman spectroscopy indicated the presence of pure lithium and nitrogen.

X-ray diffraction was carried out at beam line BL10XU of SPring-8 (Japan). CeO2 powder was used to calibrate the wavelength (0.4144 Å), the detector orientation, and the sample-to-detector distance. Beamlime characteristics and operational details are given elsewhere [6-7].

The initial X-ray diffraction patterns recorded at very low pressures only showed the presence of Li and liquid N2. And upon compression up to about 3 GPa, no Li-N alloy was observed to form. At 3.5 GPa, however, a sudden drop in the sample pressure indicated, mostly likely, the formation of a Li-N alloy. At that pressure, the sample was then heated using a focused near-infrared laser beam. Extra care was then taken in heating the sample with an increasing laser power and ensuring the entire sample was heated uniformly to an approximate temperature of 1500K. Following the heating under higher compression (16 GPa), a different X-ray diffraction pattern was observed (Fig. 1), attributed to a single phase close to uniform across the entire sample. None of the diffraction peaks observed could be attributed to solid nitrogen. Furthermore, the N2 vibron in the Raman spectrum disappeared upon laser heating (inset, Fig. 1). In addition, patterns measured at different sample spots were very similar indicating a single phase was formed. A LeBail pattern refinement led to an orthorhombic unit cell with cell parameters a = 3.238 Å, b =7.654 Å, and c = 2.311 Å. Unfortunately, the quality of the measured X-ray diffraction pattern was suitable for further analysis. 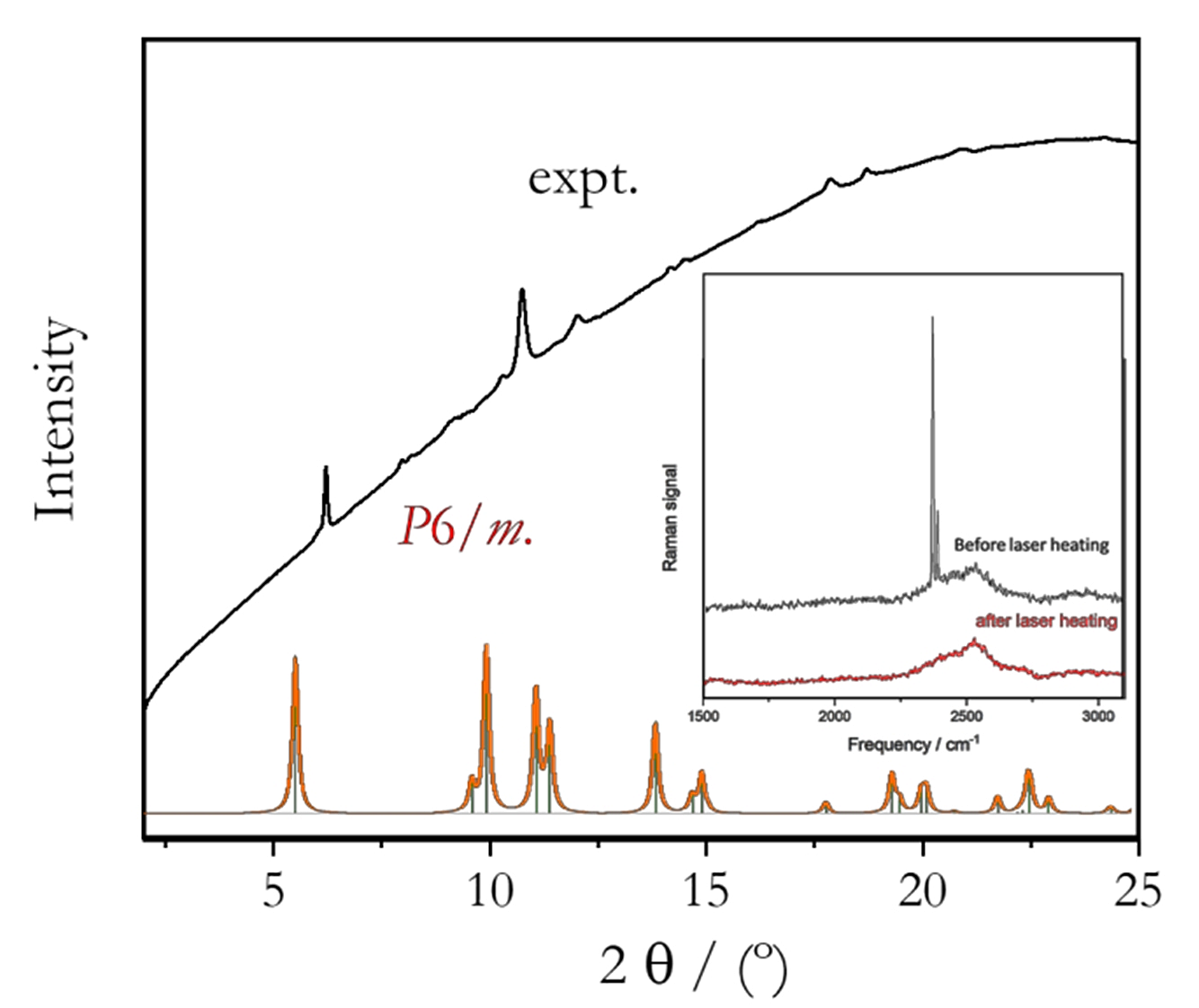 Fig. 1  Comparison of observed (black) and calculated (red and green histogram) X-ray diffraction patterns based on the predicted P6/m LiN3 structure (at 50 GPa, a = 4.918 Å and c =2.376 Å, volume =24.88 Å3/f.u.). The X-ray diffraction pattern was recorded at 16 GPa after laser heating a Li-N2 mixture at approximately 1500K. The inset shows the Raman spectra, recorded before and after laser heating.

The observed pattern does not correspond to any of the theoretically predicted low-pressure Li-N2 polymorphs [2,8]. Apart from a shift to higher angles, the X-ray diffraction features of the experimental pattern, both diffraction peak distribution and relative intensities of the Bragg reflections, were found to be remarkably similar to those obtained from an X-ray diffraction calculated based on the predicted hexagonal LiN3 P/6m structure. The predicted structure is expected to be stable at P > 32 GPa [2]. A full-pattern refinement of the observed pattern using the proposed P/6m structure or the thermodynamically stable low-pressure C2/m structure of LiN3 was not successful. Nevertheless, the similarities between the observed and the calculated X-ray diffraction patterns suggest the following: it is very likely that the structure of the newly observed phase may be derived from the predicted hexagonal structure.

An attempt was made to relate the cell parameters to the orthorhombic representation of the predicted P6/m structure and arrived at a structure requiring doubling of the a-axis. Based on the empirical observation, a model was constructed starting with the unit cell of the fitted orthorhombic structure (with a doubled a-axis) cell and using the Li and N positions of the P6/m structure. A geometry optimization using density functional calculations were performed from 50 GPa to 5 GPa. Surprisingly, a Cmmm structure was found at 16 GPa with the following unit cell parameters: a = 6.465, b =7.477, and c = 2.706 Å with atom position, Li (2h): (0,263,0,0); N(2I): (⅐,0.975,0) and N(4p): (0.332,0.304,0). The unit cell volume of 32.70 Å3/ f.u. is slightly denser than the predicted stable C2/m structure. A corresponding calculated X-ray diffraction pattern that matches the major features of the observed pattern is shown in Fig. 2. By comparing the X-ray diffraction patterns from the C2/m, Cmmm, and P6/m structures, one may speculate that, under pressure, the linear N3 moieties in the C2/m structure could bend to forming the zigzag N-N chains found in the Cmmm structure. A further compression of the solid broke the chains and linked the fragments to give the usual "N6" ring, as predicted in the P6/m structure. Surprisingly, no corresponding Raman signature associated with the "N6" ring were observed. One possibility is that the corresponding N-N mode frequency is accidentally close and hidden under the intense the C-C stretch of the diamond. The N-N stretch frequency in LiN5, composed of cyclic pentagonal N-N rings, was indeed very similar to that of the diamond [9]. 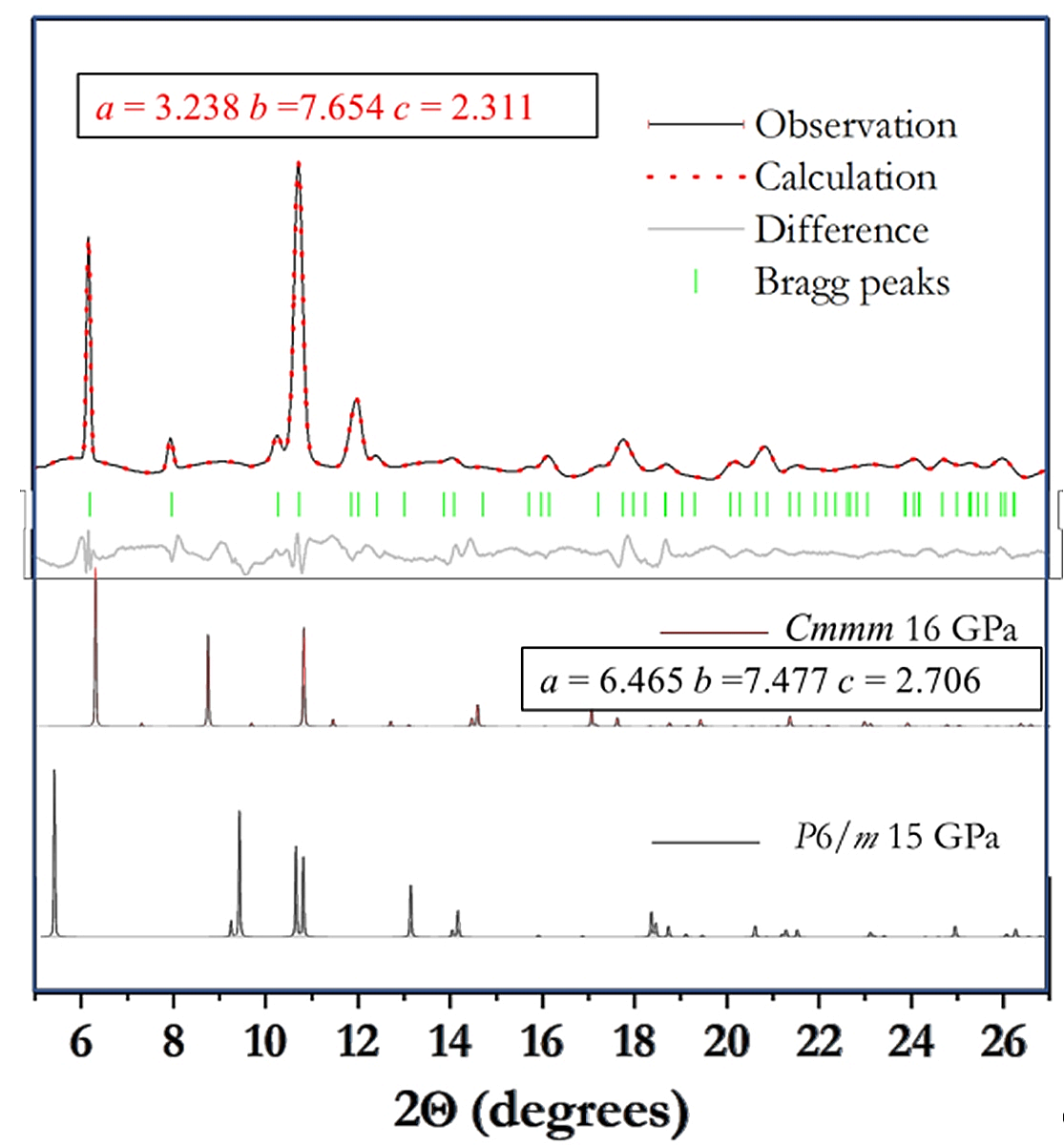 Fig. 2  Comparison of the LeBail fitted experimental X-ray diffraction pattern with that of the proposed Cmmm and previously predicted P6/m structure. The unit cell parameters are in Å.

In brief, we succeeded in synthesizing a hitherto unreported binary phase of Li-N2 system at relatively low pressure, i.e., at above 4 GPa after laser heating to 1500K. It is believed that the observed X-ray pattern corresponds from a single phase. The structural determination of observed Li-N alloy was not fully successful. As mentioned, in the predicted hexagonal structure the N atoms are arranged to form “N6” rings. Since the electronic structures of many high-pressure binary alkali metal compounds can be described as Zintl’s complexes [10] with full-electron transfer from the metal valence orbitals to the other elements, in this case, the hexagonal "N62-" molecular fragment will violate the Huckel 4n+2 rule and, therefore, must be distorted. Thus, it is not unreasonable to hypothesize that the correct structure of LiN3 corresponding to the observed X-ray diffraction pattern of the observed phase could be that of a distorted variant of the predicted ideal P6/m structure.

In the future, we wish to pursue the X-ray diffraction studies of the Li-N2 system in conjunction with simultaneous in-situ measurements of the Raman active N-N stretching vibrational mode. If indeed the formation of N6 units is to occur, then Raman spectroscopy would help in clearly showing the loss of the triple bond character of molecular N2. Better quality X-ray diffraction patterns recorded on dense Li-N samples, annealed properly, will also help in finally resolving the structure of the Li-N alloy in this study.