Iron oxides are well known in solid state chemistry to yield mainly octahedral, tetrahedral and pyramidal coordination around iron. A decade ago, we have discovered a rare case of square planar coordination around iron via low temperature topochemical reduction of SrFeO3, which is a perovskite that contains corner-shared octahedra (Fig. 1a) [1]. SrFeO2 exhibits a structure known as an “infinite layer” that was previously observed in SrCuO2 (P4/mmm) and LaNiO2. In SrFeO2, the layers are separated by strontium (A-site) in an eight-fold coordination. Expansion of the low temperature strategy allowed for the discovery of more materials containing square planar FeO4 units such as Sr2FeO3 and Sr3Fe2O5, which were obtained from the reduction of the Ruddlesden-Popper phases Sr2FeO4 and Sr3Fe2O7 [2,3]. Further expansion of this family was obtained via chemical substitution of the A site Sr1-xAxFeO2 (A = Ca, Ba, Nd, Sm, Ho) [4-8] and B site SrFe1-xBxO2 (B = Ru, Co, Mn) [9,10].

The Sr1-xCaxFeO2 solid solution is unique, since while the infinite layer structure remains up to x = 0.8, at higher calcium contents, CaFeO2 exhibits a distorted structure (P-421m) where calcium shifts out of the median plane and the square planes of iron distort tetrahedrally and rotate within the layers (Fig. 1b). Out-of-plane distortions of square planes towards tetrahedra are rare7 but here occur because Ca, smaller than Sr, would rather prefer a six-fold coordination.

In this report, we have investigated the local structural changes occurring in the Sr1-xCaxFeO2 solid solution before and after the structural transition at room temperature (x > 0.8). The goal of this research was to investigate the possible coordination differences between calcium and strontium in SrFeO2, Sr0.2Ca0.8FeO2 and CaFeO2. The use of extended X-ray absorption spectroscopy (EXAFS) allows for local structural observations that cannot be obtained in diffraction data which provides averaged structural information.

The materials were prepared using methods reported in ref. 6. EXAFS data were obtained from the absorption spectroscopy data studied at the Sr K-edge (16.11 keV) and Ca K-edge (4.04 keV) in transmission mode measured at the BL01B1 beamline at SPring-8 (Japan). The k-weight and range were k3 and 2–14 Å-1 for the calculation of the Fourier transform. The k3χ(k) spectra of Ca in CaFeO2 and Sr0.2Ca0.8FeO2, Sr in SrFeO2 and in Sr0.2Ca0.8FeO2 are shown in Figure 2. 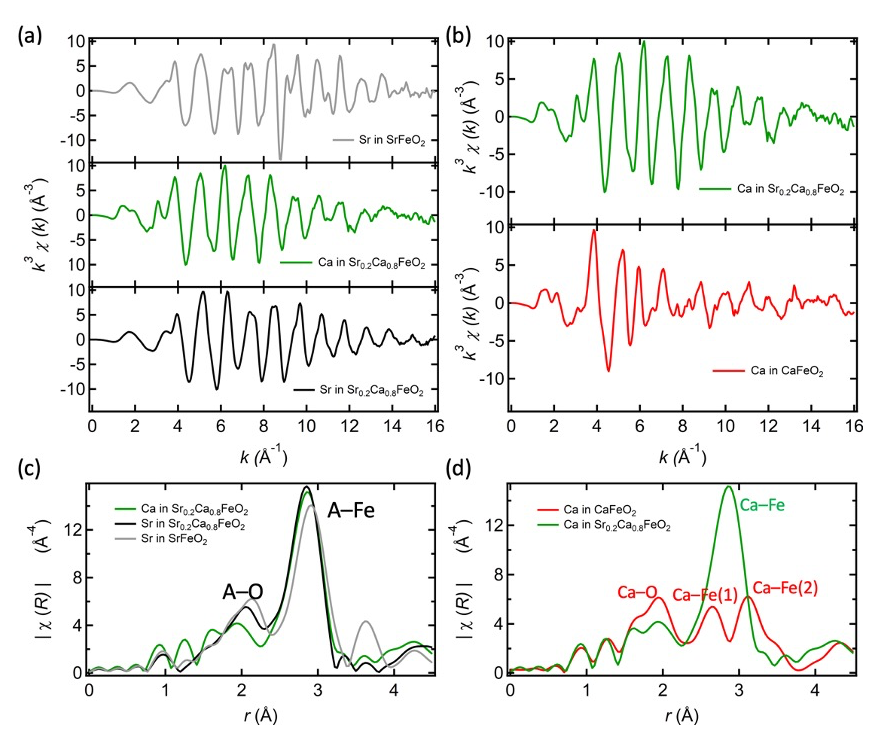 Figure 2c shows the radial distribution function obtained from EXAFS data of the Sr K-edge in SrFeO2 which exhibits two main peaks. As seen in figure 1a, in the SrFeO2 structure, the local environment of strontium consists of eight oxygen in the first coordination sphere with a distance of 2.65 Å. This distance can be assigned to the peak 1 (labeled “A-O”) located at 2.15 Å. This value is smaller than expected from the diffraction data, due to the backscattering phase term of the EXAFS equation. Peak 2 (labeled “A-Fe”), the largest peak at around 2.91 Å, can be assigned to the Sr–Fe and the out-of-plane Sr–Sr distances, at 3.31 Å and 3.47 Å, respectively.

Next, we compare the Sr- and Ca-centered radial distribution functions of the Ca-substituted structure (x = 0.8). Looking at peak 1 (A-O) of figure 2c, the Ca-O length (light green) is naturally the shortest (~1.96 Å), while the Sr-O distance in Sr0.2Ca0.8FeO2 (black) is longer, and closer to that in SrFeO2 (grey). However, peak 2 (A-Fe), which reflects the second coordination shell and hence longer-range order, shows a different story. Here, the Sr-Fe and Ca-Fe lengths (black and light green) in Sr0.2Ca0.8FeO2 are indistinguishable and equally shorter than in SrFeO2. Within Sr0.2Ca0.8FeO2, Sr and Ca occupy crystallographically equivalent sites, but these differences between peaks 1 and 2 suggest that there is more local distortion around Ca rather than Sr, based on the different A-O distance. This is not observed using diffraction data, which tends to average atomic positions and makes it difficult to characterize local structure. This observation should however be taken with care owing to the difficulties inherent with EXAFS concerning distances and the presence of a “ghost peak” on the left shoulder of peak 1 in figure 2c.

In figure 2d, the structure of Sr0.2Ca0.8FeO2 and the distorted infinite layer CaFeO2 are compared in terms of Ca-centered radial distribution functions. The first peak assigned to Ca–O is located at a similar position for both CaFeO2 and Sr0.2Ca0.8FeO2 (red and green), which suggests that the Ca–O environment should be similar in the two phases. The main change between the infinite layer structure and the distorted infinite layer can be witnessed by the two peaks observed at 2.64 Å and 3.13 Å. The former can be assigned to the bond lengths obtained from diffraction (figure 1b), the short Ca–Fe(1) distance 3.12 Å and the longer Ca–Fe(2) distance 3.34 Å and out-of-plane 3.35 Å Ca–Ca distance. This observation confirms the displacement of the Ca atoms from the median plane of the lattice in agreement with the diffraction data. The distances are different however from the diffraction determined one with a 0.49Å difference measured with EXAFS between Ca–Fe(1) and Ca–Fe(2) and 0.22 Å measured by diffraction. This may therefore indicate that more complex distortions occur within the material.

The difficulty of this study lies in the quantitative investigation of the local structure around the A site. In this study we have observed that in Sr0.2Ca0.8FeO2, strontium and calcium sit in similar environments. EXAFS of the different atoms suggest however shorter Ca–O bonds than Sr–O. Precise determination of the local structure of Ca in this structure is however difficult using this sole technique. Although here, we observed a qualitative difference between Ca and Sr, it is difficult to represent the genuine overall structure of the material and subtle changes of coordinations of iron as a function of the different atoms in its vicinity. To solve this, only a combination of different techniques (pair-distribution function, EXAFS and X-ray/neutron diffraction) could lead to the complete understanding of the anionic and cationic distribution of the structure.