Spin Density and Orbital Occupation in the Invar System Fe-Ni

The aim of this experiment was to investigate the temperature dependence of the spin density of the Invar system Fe65Ni35 via measurements on a single crystal using magnetic Compton scattering. We made measurements of the spin density resolved along the [100] and [110] crystallographic directions. The temperature dependence exhibited a subtle change in the momentum density. Interestingly, the momentum distribution of the spin moment was different for the two crystallographic directions. It would appear that increasing temperature has a complicated effect on the contributions of the electrons from different orbitals, rather than just causing a change in the amount of delocalisation. This change requires further investigation, particularly with further compositions being studied in order to determine whether the change in electronic structure can be correlated with the existence of the Invar effect.

The aim of the experiment was to investigate the temperature dependence of the spin density of the Invar system FeXNi1-X for a single crystal of composition x = 0.65 using magnetic Compton scattering. The motivation was provided by our previous experiment on BL08W, on a polycrystalline sample, that showed a subtle change in the spin density at high temperature, which was not present in a pure nickel sample. This single crystal experiment was proposed in order to improve our sensitivity to changes in the spin momentum density.

The Invar effect was first discovered by Guillaume [1]. This effect is observed as the negligible thermal expansion near room temperature of a very few materials, such as certain compositions of FeXNi1-X alloys and as well as in Fe3Pt [2] and SrRuO3 [3]. The underlying physics has been widely debated, and has been controversial for many years. Weiss [4] proposed a simple two state model, whereby thermal population of two nearly degenerate magnetic states exists in FCC Fe, a high spin, high volume state and a low spin, low volume state. This magnetic change counteracts the expected thermal expansion of the lattice, as depicted in figure 1(b). The figure shows the normal thermal expansion coefficient and the magnetic contribution, which is negative, and how they combine to give negligible thermal expansion for temperatures up to ~ 450 K. The magneto-volume effect of this thermal population would act to oppose the thermal expansion of the lattice. However, the existence of these spin states has not been observed at atmospheric pressure in any invar material. Such a spin transition has been observed as a function of applied pressure in Fe3Pt [6,7], but not as a function of temperature. 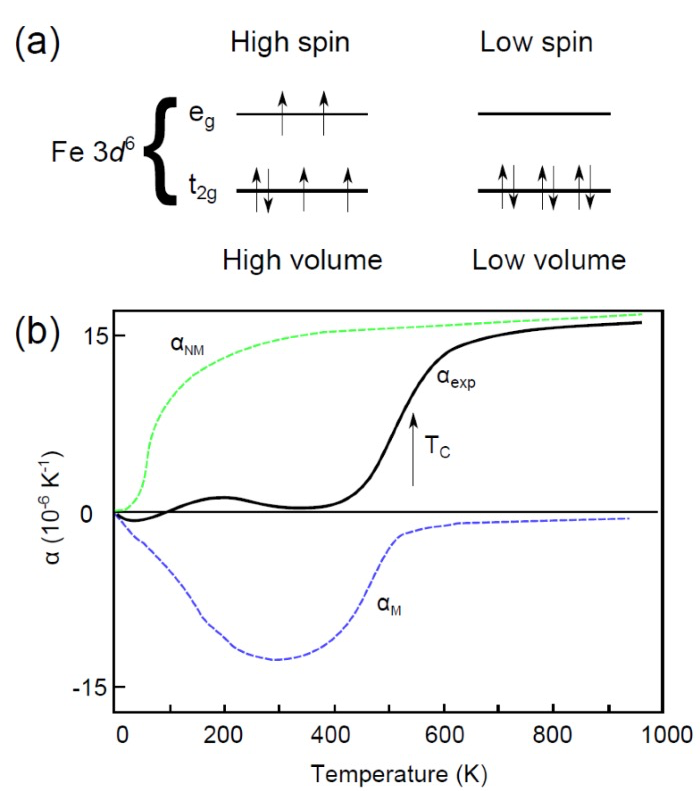 Figure 1. (a) Depiction of proposed electron orbital occupation at low and high temperature. (b) Temperature dependence of the magnetic (αM) and non-magnetic (αNM) contributions to the measured thermal expansion, αexp, of Fe65Ni35. Reproduced from [5].

A proposed mechanism for the two state model is shown in figure 1(a). At low temperature, the high volume – high spin state predominates with a magnetic moment arising from the spin up electrons in the t2g and eg states. As temperature increases, there is a gradual transition to the low spin – low volume state as the eg electrons populate the t2g state. It would be expected that such a change would be reflected in the magnetisation density. However, this has not yet been resolved. Early polarised neutron diffraction experiments did indicate some change [8], but later work using the same technique found no change in the eg population [9]. However, changes in the itinerant electron population may not be easy to determine from neutron diffraction: the technique relies on measuring Bragg peaks, and hence suffer from a lack of information at very low sin (θ)/λ, which corresponds to the itinerant electron density. Magnetic Compton scattering has the advantage that it is equally sensitive to all electrons, and hence is an ideal technique for this study.

Previously, motivated by the theoretical work and the polarised neutron data, we performed an initial measurement of the temperature dependence of the spin density in a polycrystalline sample of the Invar composition of Fe-Ni using magnetic Compton scattering on BL08W [5]. The data showed a very subtle temperature dependence, with a small delocalisation of the magnetic moment at high temperature. This most likely relates to a change in the degree of itinerancy of the moment and may well be linked to the magneto-lattice effects associated with the Invar effect. However, given that the analysis of any electron transfer in the t2g/eg orbitals is not possible using these polycrystalline data, as all anisotropy is averaged out, and our sensitivity to any charge transfer is poor. It is likely that the proposed charge transfer would only have a subtle effect on the magnetisation density, and hence the magnetic Compton profile, since it predicts that the t2g moment will be reducing at the same time as the eg moment – electron transfer from the eg reduced the eg moment, but the transfer is into the magnetic t2g states, reducing their magnetism too. Hence, the aim of the single crystal measurement was to permit us to measure individual crystallographic directions and the anisotropy in order to study the suggested charge transfer.

For the experiment we used magnetic Compton scattering of high energy (183 keV) circularly polarised photons on beamline BL08W at SPring-8. The result of such an experiment is the so-called magnetic Compton profile (MCP), which is a 1-dimensional projection of the spin-resolved electron momentum density. Magnetic Compton scattering (MCS) samples the spin dependent electron momentum density through the use of circularly polarised synchrotron radiation. MCS is only sensitive to the spin moment: the orbital contribution is not measured.

The MCP is given by:

The technique requires a high energy monochromatic beam of circularly polarised photons. The circular polarisation is required to provide sensitivity to the spin dependent term in the scattering cross section. This term in the cross section is enhanced at high energies. This high energy, together with a high scattering angle of approximately 176 degrees, also provides good momentum resolution in the measured profiles. In order to extract the spin polarised signal two measurements are made with parallel and antiparallel applied field directions with respect to the scattering vector, the magnetic Compton profile is determined by the subtraction of the two spectra. The applied magnetic field was generated by a 2.5 T superconducting magnet installed on BL08W. The Compton-scattered radiation was detected with a multi element Ge SSD system. For this experiment, we performed experiments as a function of temperature up to 500 K. The sample environment normally available has a temperature range of ~ 6 K to 300 K, and hence we built a new sample stage. We constructed a cooper sample holder, with a small cartridge heater and temperature sensor. This was then attached to the existing sample stage on BL08W via sapphire rods and spacers. Sapphire has a low thermal conductivity at elevated temperatures, so the set up provided a high degree of thermal isolation of the sample and its holder from the rest of the experimental apparatus. Finally, the sample stage was surrounded with a heat shield to protect the apparatus from radiative heating. A small hole in this permitted direct access for the X-ray beam and for the Compton scattered X-rays to reach the detector.

We made measurements of the spin density resolved along the [100] and [110] crystallographic directions in the Invar composition Fe65Ni35. We measured at several temperatures, from 100 K up to 500 K, but found this to be the limit of being confident with the adequacy of the thermal isolation. Example magnetic Compton profiles for T = 100 K are presented in figure 2 for the [100] and [110] directions. The inset shows the magnetic moment determined along the [100] direction for temperatures up to 500 K, showing the expected magnetic behaviour. 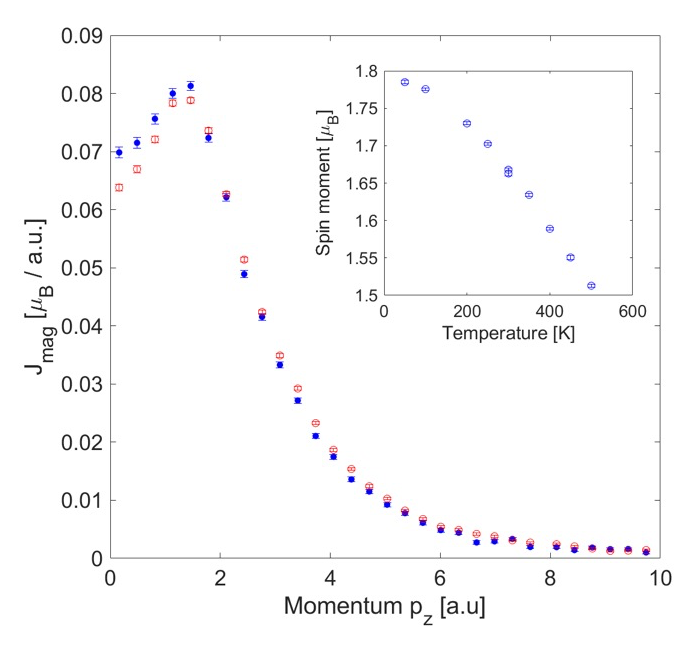 The shape of the magnetic Compton profiles exhibited a subtle temperature dependence. This was most apparent when comparing the data between 100 K and 400 K. These are presented for the two crystallographic directions in figure 3, together with data collected for a pure Ni single crystal at the same two temperatures. For these plots the data have been normalised between the two temperatures to take into account the small change in magnetic moment, in order to compare the shape of the profiles. Considering the Fe65Ni35 sample, these plots show a different temperature dependence for the two crystallographic directions. It was anticipated that there might be a change in itinerancy as temperature was in increase, but, interestingly, we found that the behaviour was different for the two crystallographic directions. It would appear that increasing temperature may have a complicated effect on the contributions of the electrons from different orbitals, rather than just causing a change in the amount of delocalisation. However, as discussed below, there are some issues that would need addressing via further experimental work in order to verify these data.

The data presented in figure 3 are potentially very interesting. However, in the experiment conducted, it was not clear for certain whether the effect was robust, and confirmation of this result is necessary. For the other temperatures studied, the differences were not clear. This was partly because of the statistical accuracy obtained. The change apparent in figure 3 requires further investigation. Firstly, there is a small but non-zero effect observed in Ni. In previous work focussed on Ni using BL08W, we found no such change [5] and this result most likely represents the limit of a systematic error – nevertheless, the signal is somewhat smaller than the changes observed in Fe65Ni35. Having found this effect during the experiment, it is necessary first to ascertain whether it is reproducible. Then further studies would be required. Firstly, to study temperatures in the same region to probe the behaviour more thoroughly. It would then be particularly important to study further compositions in order to determine whether the change in electronic structure can be correlated with the existence of the Invar effect. For future work, a new dedicated sample environment combining low temperatures down to 100 K or lower, together with high temperatures up to ~700-800K would be required. 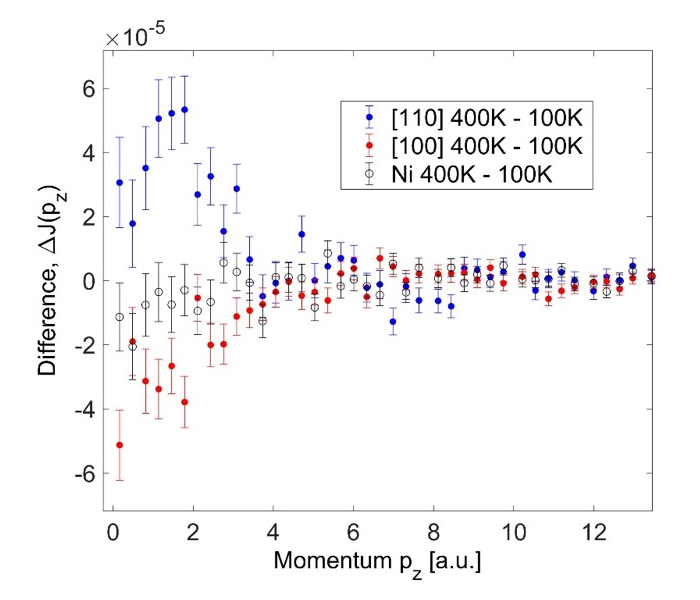 Figure 3. Magnetic Compton profile temperature differences for Fe65Ni35 (red and blue) and Ni (black) symbols. Note the effect has the opposite sign for the two crystallographic directions on Fe65Ni35. There is small difference in the Ni profile, which may represent a small systematic normalisation error.

In conclusion, we performed and experimental study of the magnetic spin density in the Invar material Fe65Ni35. We obtained a potentially interesting result, indicating a possible redistribution of the magnetisation density at elevated temperature. However, further experiment work is required to confirm this and to make the study systematic. In order to do this, a new dedicated cryofurnace sample environment is required that is also compatible with the cryomagnet and with the need for it not to cause a background X-ray scattering signal.

We acknowledge UK EPSRC for support via grant EP/J003492/1, The Compton scattering experiment was performed with the approval of the Japan Synchrotron Radiation Research Institute (JASRI, proposal no. 2012A1280). We thank Y. Sakurai and M. Ito for their assistance.